How I beat the online game 1to50 with neural network

The 1to50 bot — in all its glory!Well it all started when some of my friends started playing this online game 1to50 and they challenged me to beat their score. So the rule is quite simple, start clicking the blocks with numbers, in incremental order, as fast as you can. Seems quite easy, right!? It did to me too, but my friends were scoring pretty good in it (try it, and if you consider 30–35 secs good). And I had to beat that, and if you may, in style :)

For a bot to win this game, it should be able to determine the position of the individual numbers on the screen and simulate click events on those positions in incremental order. So I divided the problem into,

This is arguably the most discussed example for image classification problem. Ask any neural network enthusiast, and he/she will recommend you convolutional neural network for images. And most of them will suggest using MNIST database as they contain huge number of numeric digits examples. But it has a few problems of its own,

So if you look closely at the game board, it is kinda same every time, right! So will be the numbers inside, every time. We don’t need to collect thousands of digits example and train on them, if we are only going to get same digit images. So how should we exploit this knowledge…simple separate all these numbers, make copies of them and train the network on them. And that’s exactly what I did! And the best part, it works with a simple 1 hidden layer vanilla neural network. 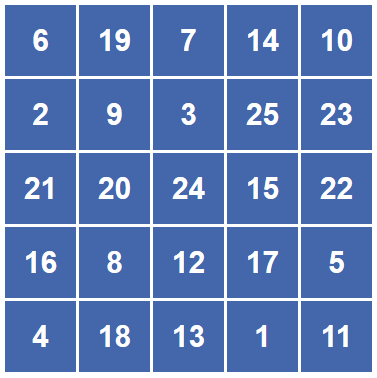 The 1to50 game board, currently showing only 1 to 25, with each click new number form the 26–50 range will appear.

Separated numbers box from the game boardI used Greenshot to take screenshots of the game board, and wrote a script to separate out the individual numbers from the board by finding the contours and defining bounding rectangles. Repeated this for 26 to 50 number range and I have 50 images of digits 1 to 50, each of 71 by 71 pixel size. Now comes the interesting part!

Our final goal here is to have a neural network, which takes each of these images as input and correctly classifies them as output, so lets define our input layer of 71x71=5041 nodes and output of 50 nodes length. Lets throw in a hidden layer of same size as input layer. So our final neural network looks something like this, 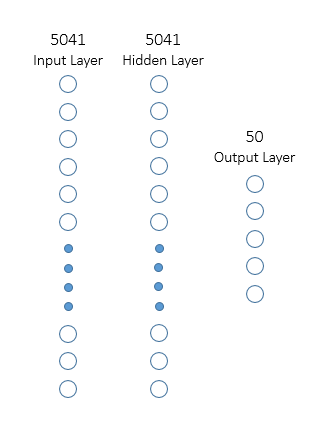 Neural network visualization used for the 1to50 botWhich is quite easy to implement using Keras in python, here we go,

model.compile(loss=’categorical_crossentropy’, optimizer=’adam’, metrics=[‘accuracy’])We are nearly done here. All we need to do is load the images, make copies of them, I made 400 copies of each, so its 400x50 = 20,000 sample images for training, use same for testing for the sake of it, set the epochs and batch size (sometimes playing with them can vary the training results) and hope for once, that our network overfits on the data. And it did :)

Done with the machine learning part, let move into the developmental part. So here are some of the things we want to do, 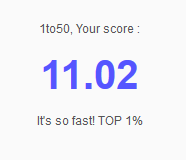 Well there a lot of things I would have done differently, like implementing the convolution network, or using the MNIST dataset or even doing a simple image lookup instead of implementing the vanilla neural networks. But that wouldn’t have been this much fun, at least not for me. If someone is able to come up with another approach, do share your experience. Till then, adios.

Get all the code discussed in the post **here*.*