What is reinforcement learning

Reinforcement learning is an area of machine learning dealing with delayed reward.
What does this means? Well, simple, let me explain this with an example. For this I am assuming you have heard (better if you know) about neural networks or even a basic knowledge of regression or classification will do. So lets take an example of classification problem, you have been given a large chunk of images of dogs, and you have to design a system which will be able distinguish between an image by saying if it is of dog’s or not. Anyone with a little knowledge of machine learning will advice you to use convolution neural network and train with the provided images, and yeah it will work. But how? Well, without going into details (maybe an article on this later?!) you train the neural network on sample images first. While training the neural network learns the little features and pattern unique to dog’s image. During training you know the expected output, it is a dog images, so whenever the network predicts wrong we correct it. In a way, we know the reward for the provided images, if the prediction is right, we give positive rewards, if prediction is wrong, the reward is negative and corrective measures are taken to learn and adapt. So we know the immediate rewards.

But what if we don’t know the immediate rewards? Here, reinforcement learning comes into the picture.

To explain this, lets create a game. The game is simple, there are 10 tiles in a row. All tiles are not equal, some have hole where we do not want to go, whereas some have beer, where we definitely want to go. When the game start, you can spawn on any of tiles, and can either go left or right. The game will go on unless either we have won or its game over, lets call each such iteration an episode.

Go for beer!!So, if you spawn on the 0th tile or somehow travels to 0th tile, its game over but if we travel to tile 6, we win.

Let’s take one simple episode as example. Ok lets say we spawn on tile 2. Now suppose I haven’t shown you the game map and you only have the option of going left or right, which way will you go? Well you can’t say unless you try it out. Let’s say you keep on going left, till you are in tile 0, the tile with hole and you lose. This is not what we want to happen, so lets assign a negative reward to our action of going left from 2 to 1 to 0. In next episode by some chance you spawn in tile 2 again, this time you keep on going right, until you reach tile 6. Here we got the beer, lets assign the actions with positive reward.

What we learned? for every step we take, until we hit the hole or beer, we don’t know of the rewards. Delayed rewards guys. There is no one who tells you the right direction, after every step there is no reward, suggesting its the right or wrong direction. Now its even difficult for us to grasp the sense of right actions, what if we want the computer to learn this? Reinforcement learning to the rescue.

Now what is this Markov process and why do we need to learn it? Well I thought the same and to be clear, we don’t need to deep dive into it, just a basic intuition would do.

So, markov decision process is used for modeling decision making in situations where the outcomes are partly random and partly under the control of a decision maker. In a nutshell, all the tiles, left & right actions, the negative & positive reward we discussed can be modeled by markov process.

A markov decision process consist of,

Now taking all the above learned theory in consideration, we want to build an agent to traverse our game of beer and holes (looking for better name) like a human would. For this, we should have a policy which tells us what to do and when. Think of it as a revealed map of the game. Better the policy, better our chances of winning the game, hence the name Q (quality) learning. The quality of our policy will improve upon training and will keep on improving. To learn, we are going to use the bellman equation, which goes as follows,

Ok too much theory for now, let code.

Let me define the states, actions and rewards as matrix. One way of doing it is having rows for all the state and columns for actions, so as we have 10 state and 2 actions, we will define a 10x2 matrix. For simplicity I am not using any library, just coding them with lists in python.

Now its time for our magic Q table, which will update as the agent learns on each episode.

Defining some function which helps in game traversal. 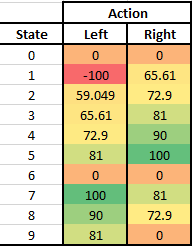 Now what does our policy says, if you find yourself at any of the state, choose the action with higher value (here darker shade of green) and you will reach the tile with beer. Not bad, right!

What if we increased the complexity of our game by having 2D boards with multiple holes, well that would be an interesting thing to do.